How to Use CAD Data within Unity and Unreal

Following the Theorem-XR Q2 2022 release, we sat down with Ryan Dugmore, Consultancy Director at Theorem Solutions, to discuss the innovative new features, enhancements, and trends across Extended Reality (XR) in engineering and manufacturing.

Or if you’d prefer to read it instead, here is what was covered:

What’s Trending in the XR Space

XR is being used in many different industries for a wide range of engineering and manufacturing use cases. We always try to stay up to date on how people are using this incredible technology.

Ryan says, “We’ve been working on enhancing features, getting things refined, and understanding how people are starting to use this XR technology. And how we can adapt our applications to obviously support them in it”

Since XR is still quite new it is constantly changing, and the way in which people use it changes too. So, we regularly update our applications to support emerging use cases.

One of the main things we’ve been seeing recently is that rolling out XR across a whole business is very difficult, particularly when you have to buy new equipment like headsets, and train workers on how to use them.

Ryan talks about how to address these problems, “Improving the ease of adoption is looking at: what have we got today? And what are the barriers that we’ve got today? And how can we improve them?"

"What hardware do we currently own? How do we use it? And how do we enhance it to take advantage of XR? And one of those things we’ve seen a push in is AR support. So coming back from the HoloLens, VR Kit, the new devices, to look at devices that the workforce is already using and already familiar with.”

Q: Since Augmented Reality (AR) is so important for ease of adoption, what does this release bring to Theorem-AR?

The Q2 2022 release has certainly been an important one for Theorem-AR.

Ryan discusses the focus of this release for AR, “Using the Theorem-XR layout experience, being able to build layouts of geometry, and factory spaces, work environments that you’re using, and how can we replay those and view those using the tablet?"

He goes on to talk about the features we’ve improved, “So, looking at things like model placement, improving the tracking, where we’re placing the information, overlaying it in real life. And using features like isolating components, being able to interrogate the data that we’ve loaded, and being able to use it, but in the devices that people are more familiar with.”

Q: Is there anything non-AR-related in this release?

There absolutely is. It’s not just AR that we’ve been improving on when it comes to large data, Mixed Reality (MR) is getting an update too. Streaming large datasets is now much faster.

“At the previous release we talked about Microsoft Azure Remote Rendering, getting huge datasets into the cloud, and we’ve enhanced that further at this release. So, we’ve looked at directly passing huge datasets up to Azure. So, there’s no interim processing.”

Q: Are there other Mixed Reality updates in this release?

So, what is the new QR Code offset feature and what is it useful for? Ryan explains, “We’ve got improved QR code placement and being able to offset to known locations, known distances. So, that enables overlaying of digital and physical more accurately.”

And what about the markup tools, “These have been available in our VR and desktop applications for a while. But they’ve now been included in Microsoft HoloLens. So, the users can mark up using a digital pen and record images”

Q: And finally, is there anything for Virtual Reality (VR) users in this update?

The main VR feature of this release is that the product structure viewer from your CAD system is now in VR.

Ryan talks about how this feature gives engineers the options they’re used to when working in their CAD system, “You’ve got obviously your full product structure in your CAD system, you’ve got engineers that are used to utilizing the product structure, the assembly structure, and the parts associated. We can now review that in our application… It’s just, again, an enhanced feature enabling users to better control their data and control what they’re doing with the data on screen.”

The Q2 2022 release brings a variety of enhancements for Augmented, Mixed and Virtual Reality. Theorem-AR can now be used to visualize and manipulate large datasets on handheld devices, like tablets, which users are already familiar with.

For Mixed Reality users there have been improvements to how we use Azure Remote Rendering; users can now pass information directly to the cloud and quickly stream large datasets. Also in MR is a QR code offset feature that allows for more accurate model placement. Along with a holographic pen for the HoloLens 2, that enables users to markup their data.

Want to learn more? Get in touch with our team of specialists today. We’re here at every step of your XR journey. Or for the latest XR news and updates, follow Theorem on LinkedIn and Twitter. 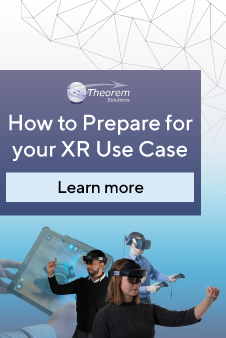 How to Use CAD Data within Unity and ...

Extended Reality (XR) provides a range of new opportunities for engineering and manufacturing companies. From new training methods to digital ...

QR codes are used in so many different ways, but did you know that they can be used to enhance your XR experience as well? Since both Mixed Reality ...

You most likely know that Augmented Reality (AR) can be used to visualize 3D CAD data in a real-world context. Previously in Theorem-AR though, only ...